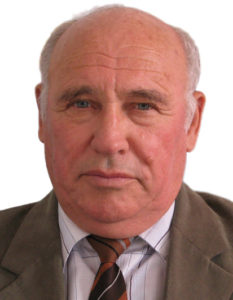 He graduated from the Lviv Polytechnic Institute with a degree in electrical measurement technology in 1960. He worked on the distribution in the Research Institute-2 of the Ministry of Defense in Kalinin (in the present city of Tver) in 1960-63, in 1963-66. he studied in graduate school Institute of Automation and Telemechanics (Technical Cybernetics) (head P. P. Parkhomenko) in Moscow. He defended his doctoral dissertation in 1982 at MEPhI.

Since 1966, he worked at the Moscow State University of the Russian Academy of Sciences, and since 2015 at the IPTS..

The works of V. A. Gaisky belong to the field of instrument engineering and information technologies, devoted to various issues of creating and improving automated environmental control systems. These are more than 300 scientific publications, including 4 monographs and 75 inventions.

The theoretical results obtained by him include the following works:

On the reliability of systems.

On the analysis of methodological measurement errors (sampling errors) of random processes and fields.

To reduce the sampling error of processes and fields.

To improve the performance of computing tools.

As a responsible executor or scientific supervisor of projects and topics, he directly participated in the development, practical implementation and implementation of the communication ring and the equipment of the SPRINT system-instrument interface» (1972-77) for research vessels of the Institute, towed guided measuring complexes Nyrok–2 (1970), Gals–1 (1972), Gals–2 (1975), Gals–3 (1985), hydrological sounding complexes of the “Microprobe” series (1971-1998), hydro-optical probe “Scalar” (1973); hydro-chemical probes Istok-7 (1990); Istok-8 (1992), GKHZ-1 (2007), a series of distributed Walsh thermoprofilemers (1980-2007), the 9th generation of MGI devices: a set of equipment for the offshore coastal hydrometeorological station “Breeze” consisting of a STD-sea level meter, a hydrological module, a transparency meter, a wave parameter meter and a central module with an industrial PC (2007), portable flow velocity meters of the acoustic IST–1 (2005-2007).) and thermoanemometric IST-2 (2005), bioelectronic complexes for detecting water toxicity (2008-2016).

He took an active part in the creation of automated oceanographic systems on MGI vessels and in the development of concepts for the construction of the sea and river-based subsystem of the State Ecological Information System of the USSR (1991) and the automated system for environmental control of Ukrainian waters (1997).