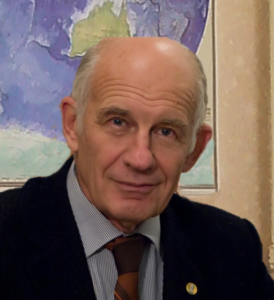 Corresponding member of the Russian Academy of Sciences, doctor of geographical sciences, professor, scientific director of FSBSE “Institute of Natural and Technical Systems”

In 1973, A.B. Polonsky graduated with honors from the Odessa Hydrometeorological Institute with a degree in Oceanology. From 1973 to 1976, he worked on assignment in the Hydrographic Service of the BSN in Sevastopol, later he started working at the Marine Hydrophysical Institution, with simultaneous enrolling in PhD graduate studies at the Hydrometeorological Center of the USSR. After successful completing PhD graduate studies, A. B. Polonsky defended his PhD thesis in the specialty “Geophysics”, and in 1991 he defended his doctoral dissertation in the specialty”Oceanology”. In 1999, he was awarded the title of Professor in the specialty “Oceanology”. In 2009, he was elected a corresponding member of the national Academy of Sciences of Ukraine, and in 2016-a corresponding member of the Russian Academy of Sciences. Thus, A. B. Polonsky has been working in the Academy of Sciences for more than 40 years.

A. B. Polonsky research interests cover such key problems of modern oceanology, geophysical hydrodynamics and climatology as global changes in the natural environment and climate of both anthropogenic and natural origin, regional changes in hydrometeorological fields related to global climate processes in the ocean-atmosphere system, global and regional oceanic circulation and water dynamics. A. B. Polonsky is the author and co-author of more than 450 scientific national and foreign publications, including 7 monographs.

The main results of A. B. Polonsky scientific activity within the framework of the listed areas are as follows:

1. Global changes in the state of the natural environment and climate.

Under this area of research, A. B. Polonsky focused on the relative role of natural and anthropogenic factors that determine the variability of the global climate system. He showed a crucial role of the World Ocean in the formation of the observed long-period variability of this system with characteristic time scales from 50 to 100 years, and studied the influence of various mechanisms of large-scale ocean- atmosphere interaction on the global climate.

Research in this area is mainly concerned with the study of regional manifestations of such global climate phenomena as the El Nino-Southern oscillation, the Arctic and North Atlantic oscillations, the Atlantic multi-decadal oscillation, and the Pacific decadal oscillation. It is these processes in the ocean-atmosphere system that form the physical and geographical features of climate change on the globe.
It is shown that the Arctic and North Atlantic oscillations are responsible for the main part of the dispersion of hydrometeorological characteristics of the Atlantic-European region. At the same time, Pacific phenomena such as El Nino and decadal oscillation also cause significant changes in the climatic conditions of the European region. The combined influence of these factors results in the formation of extreme hydrometeorological conditions, including floods and droughts.

3. Global and regional ocean circulation and dynamics of the Black Sea waters.

For many years, A. B. Polonsky has been studying the physical and geographical features of the global ocean circulation, which is responsible for long-period climate changes on the globe. He is the first to describe the main features of the Tropical Atlantic circulation that form the meridional heat transport to the subtropical regions of the North Atlantic, as well as characteristics of the seasonal cycle of the Equatorial countercurrent system in the Atlantic and Indian oceans. A significant part of the results was obtained by him personally in the course of expeditionary studies in the regions of the World Ocean mentioned above. A. B. Polonsky comprehensively investigated the contribution of synoptic eddies in the ocean to meridional heat transport. He showed that, despite the intense nature of oceanic eddies in the Northern part of the Tropical Atlantic, they do not significantly contribute to the meridional heat transport compared to synoptic eddies in the atmosphere. He is one of the first scientists in the world to establish that coupled fluctuations in the ocean-atmosphere system in the North and Tropical Atlantic are responsible for climate changes in the Atlantic-European region with a characteristic time scale of several decades. His work made a fundamental contribution to the development of parameterization of the upper mixed layer in models of water circulation in the Equatorial zone of the World Ocean. A. B. Polonsky has been studying the circulation and dynamics of the Black Sea waters for more than 40 years. He has participated in numerous expeditionary studies, the results of which are used as the basis for the creation of the Black Sea databases. Long-term trends in changes in the circulation and structure of the Black Sea waters are currently being studied using the generated information arrays.

Currently, A. B. Polonsky is the Editor-in-Chief of the journal “Environmental Control Systems”, a member of the Editorial Board of the journal “Proceedings of the Hydrometeorological Center”. He is one of the experts involved in the development of various short -term, medium-term and long-term oceanographic programs and projects. The expert of IPCC.

A. B. Polonsky pays great attention to the training of highly qualified scientific personnel. Under his scientific supervision, 10 PhD theses were prepared and successfully defended. Two of his pupils became doctors of science. Currently, he is the scientific supervisor of five applicants for the degree of candidate of sciences. He lectures to students of Sevastopol State University and is a professor of the Sevastopol Branch of the Lomonosov Moscow State University.

A. B. Polonsky main publications for the last 25 years: