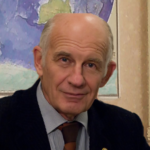 Alexander Borisovich Polonsky was born on February 23, 1951. In 1973, he graduated from the Odessa Hydrometeorological Institute with a degree in oceanology, and in 1980 – postgraduate course at the Hydrometeorological Center of the USSR. In 1981, he became a candidate of Physical and Mathematical Sciences in the specialty “geophysics”, and in 1991 – a Doctor of Geographical Sciences in the specialty”oceanology”. Professor since 1999, corresponding member of the National Academy of Sciences of Ukraine since 2009. In 2016, he was elected a corresponding member of the Russian Academy of Sciences. Honored Worker of Science and Technology of the Republic of Crimea.

Currently, A. B. Polonsky is the scientific director of the Institute of Natural and Technical Systems (IPTS) of the Russian Academy of Sciences, head of the basic department “Monitoring and Climate Theory”, created on his initiative at Sevastopol State University, and the Department “Ocean Geography” at the Branch of the Lomonosov Moscow State University in Sevastopol. Guest lecturer at the University of Barcelona in 2012-2014.

A. B. Polonsky is an internationally recognized scientist in the field of oceanology and climate theory. The results of his research activities cover such key problems of modern oceanology, geophysical hydrodynamics and climate theory as global changes in the natural environment and climate of anthropogenic and natural origin, regional changes in hydrometeorological fields in connection with global climate processes in the ocean – atmosphere system, the dynamics of global and regional ocean circulation. For many years, he has managed major academic topics and climate-focused grants. Member of the Scientific Council of the Russian Academy of Sciences on the problems of the Earth’s climate.

Among the scientific results obtained by A. B. Polonsky, the following can be distinguished:

Since the 1980s, A. B. Polonsky has devoted a lot of time to training highly qualified scientific personnel. He created a scientific school in the field of oceanography and climate theory. Under his leadership, more than 30 specialists and masters have been trained, and 10 PhD theses have been successfully defended. Two of his students became doctors of science. Currently, he directs the work of four candidates for the degree of Candidate of Sciences. Thus, the reproduction of several generations of researchers in the specified scientific direction is ensured.

A. B. Polonsky is the author of about 500 scientific papers, co-author and editor of one of the chapters of the fifth IPCC Assessment Report on Climate Change. More than 75 works, including 3 monographs, have been published in the last five years. Currently participates in the preparation of the IPCC’s sixth Assessment Report on Climate Change. He is a member of the Russian and American Geographical Societies, the European Geophysical Union. Winner of the 2019 ASLI’s (Atmospheric Science Librarians International) CHOICE Honorable Mention award, awarded as the author of the monograph “The Ocean’s Role in Climate Change”, published in 2019 in the UK and recognized as one of the best in the field of atmospheric science and climatology at the end of the year.

A.B. Polonsky-Chairman of the Academic Council of the IPTS and the Joint Dissertation Council D999. 231. 02 at the IPTS and Sevastopol State University. Editor-in-chief of the periodical scientific and technical journal “Environmental Control Systems”, member of the editorial board of the journal”Hydrometeorological Research and Forecasts”.

The editorial board of the journal “Environmental Control Systems” congratulates the hero of the day and wishes him many years of fruitful scientific and organizational activities.