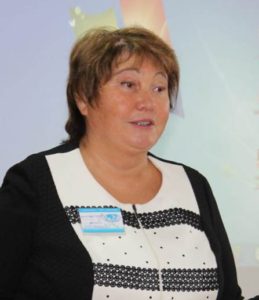 Deputy Director of the “Institute of Natural and Technical Systems” (“IPTS”)

Co-Chairman of the Academic Council of “IPTS”

In 1974, she graduated from the Sevastopol Instrument-Making Institute with a degree in Automation and Telemechanics, and in 1988 from the Moscow Institute of Physics and Technology with a degree in Automation of experimental research.  All her professional activities for more than 45 years are inextricably linked with her work in the Academy of Sciences system in the field of research of low-frequency variability in the ocean-atmosphere system and its regional manifestations. Until 2015-at the Marine Hydrophysical Institute of the National Academy of Sciences of Ukraine. During this time, she repeatedly participated in expeditions on research vessels of the MSU of the Academy of Sciences of the Ukrainian SSR, worked in the Guinean Research Center. Since 2015, he has been working at the Institute of Natural and Technical Systems. In 1993, she defended her PhD thesis “Low – frequency variability of hydrometeorological fields of the North Atlantic”, and in 2005-her doctoral thesis “Global processes in the ocean-atmosphere system and their impact on natural anomalies of the Atlantic-European region”. In 2011, she was awarded the title of Professor. In 2016 she became an academician of the Russian Ecological Academy.

E. N. Voskresenskaya conducts extensive scientific and organizational work, providing and leading a wide range of international and national projects in such key areas of fundamental research in the field of oceanology, climatology and ecology, as large-scale interaction in the ocean-atmosphere system, variability and changes in the state of the natural environment and climate under the influence of natural and anthropogenic factors, as well as to solve a number of applied problems aimed at ensuring sustainable development of regions.

In 1998, for her active scientific and social activities, E. N. Voskresenskaya was awarded the medal “80th rokiv of the National Academy of Sciences of Ukraine”.

In 2001, she was awarded an Honorary Diploma of the Presidium of the Supreme Soviet for conducting topical research of the recreational potential of the Crimea and high professionalism  The Autonomous Republic of Crimea.

In 2002, for a series of collective works on medical and climatic research, she was awarded the Prize of the Council of Ministers of the Autonomous Republic of Crimea.

In 2016, for her contribution to the development of environmental science and environmental education, she was awarded the medal “150 years since the birth of V. I. VERNADSKY”.

E. N. Voskresenskaya is the author and co-author of more than 250 scientific papers published in domestic and foreign publications, including 4 monographs.